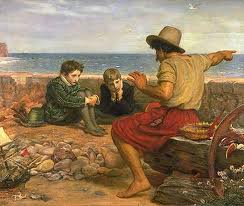 A young blind boy sat on the familiar granite steps of a large church hoping today will be better than the days before.  In front of him sat an old tin cup and a small cardboard sign with a message that read “I’m blind. Please give.”   Everyday he listened to the different sounding footsteps of people as they rushed by.  He tried to imagine the appearance of the people as he responded with gratitude at the sound of change being dropped into his cup.  This morning had started as any other until he heard the approach of the heavy sound made by a pair of expensive hard leather shoes.  The approaching man stopped and without speaking a word, picked up the young boy’s sign for a few moments before replacing it.  The young boy could hear the sound of paper money being stuffed in his cup and responded with sincere gratitude as the heavy steps faded into the crowd.  That day the boy was astonished at the number of people that stopped and dropped money in his cup.  In the cooling air of the ending day, the boy once again heard the approach of the heavy steps from the morning.  “Excuse me sir” said the boy.  “After you stopped this morning, I could tell that more people took notice of me and I am not sure why.”  The man replied “This morning when I stopped, I took the liberty to re-write the message on your sign.”  When the boy inquired as to the new message, the man said it simply read “It’s a beautiful day but I’m unable to see it”.

This simple story is a good way to show nonprofit organizations that with fundraising “it’s not what you say but how you say it”.  The challenge in any type of appeal is trying to get your message across to supporters in a way that will inspire them to give.  More and more nonprofit organizations are remembering that the best way to express their mission is to tell it in a story

Story telling has been a part of our culture since the dawn of man.  In France, twenty thousand year old cave drawings tell us stories of daily life for the people of that time.  Many of the ancient religious texts are written as to teach through a collection stories or parables.  History and life lessons have been passed from generation to generation through the use of story telling.  Today, my adult children can still remember, when they were very young, the car ride home one Halloween afternoon when I told them the story of Ichabod Crane and the Headless Horseman from the Legend of Sleepy Hollow.  Stories have a way of creating a mental image that stay in our memory much longer than other forms of communications.

Unfortunately, the art of story telling is being lost to high tech video magic.  How many times have Hollywood move makers tried and failed to capture the visual image created by a well written novel.  Reading or hearing a story told allows our imagination to create a very powerful and personal mental image that may be unique to each person that experiences the story.  Nonprofit organizations are starting to understand the power of telling their story with a story.   Most organizations have a really good stories to tell but fall very short when it they have the opportunity to share it.  Others resort to pie charts, bar graphs and statistics to try to tell their story.

Story telling is like any other art and needs to be practiced.  We all know a friend who always seems to be able to make a story interesting. We have all also experienced the person who heard a great joke but struggles to repeat the simple story and then blows the punch line.  When telling your organization’s story to a potential donor, you do not want to struggle with the story and then blow the appeal.  Practices telling your organization’s stories until you can comfortable tell the right story for the audience you are speaking to

Here are a few simple thoughts on better story tellin

Telling the story of your organization is a great way to build a stronger relationship with those that support your mission.  An interesting thing we have learned from the internet is that a well done story or video can quickly go “viral” and will take on a marketing life of its own.  Do not be surprised that when you learn the art of telling your organization’s vision in a compelling story, that the story maybe repeated by those that remembered what you said and you could hear the sound of people dropping money in your cup.